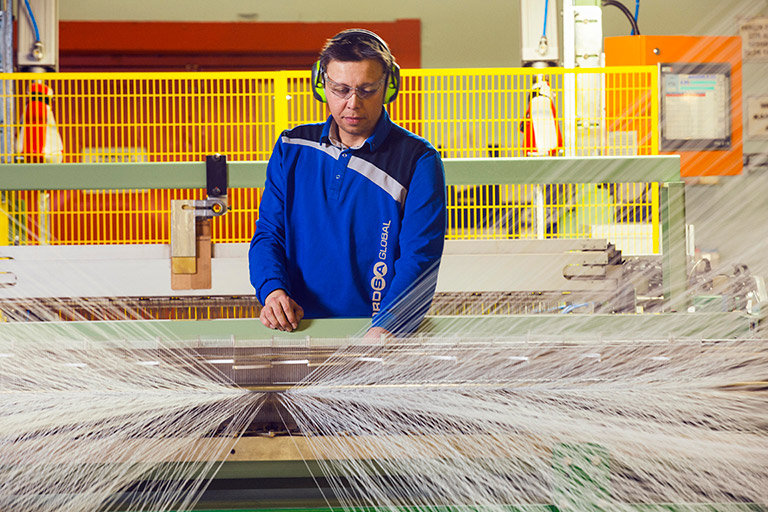 Initially positioned as the market leader in Turkey, Kordsa has achieved world market leadership through the years thanks to its deep know-how in reinforcement materials and processes, advanced R&D efforts, open innovation culture and strategic approach to the tire reinforcement sector.

The reinforcement brand; Kordsa, aims to create sustainable value for its customers, employees, shareholders and to the community it belongs to, by delivering value added and innovative reinforcement solutions.

Kordsa, positioned as “The Reinforcer”, has reshaped the industry with its strong innovation-based approach and recently has entered new business lines, transferring its tire reinforcement know-how accumulated since 1973 to the construction and composites sectors.

Reinforcement technologies leader Kordsa, inaugurated Composite Technologies Center of Excellence in 2014, in cooperation with Sabancı University. The Center will bring together Sabancı University faculty members, PhD students and Kordsa employees under the same roof. Through this industry-university cooperation model, the first of its kind in Turkey, Kordsa embraces and initiates the concept of open innovation. TL 100 million is invested in the Center.

The year 2016 has been a year in which Kordsa has reinforced its global leadership with the awards received. It is selected as the export champion both in Turkey and Indonesia in 2016. Honored as the “Great Place to Work” in Brazil, Kordsa has also received the “Best Employee” award in Indonesia thanks to the project “Safety Experience Center”.
According to 2015 R&D Centers Performance Index by the Science, Industry and Technology Ministry, Kordsa is among the top 3 companies having the best R&D Centers and is ranked the first R&D Center in textile category for the fourth time.

Kordsa, making a record number of patent applications in 2016, has 32 inventions and 103 patent applications only in 2016. It has 407 patent applications and 128 inventions in total.
Kordsa is awarded Special Award at “Energy Efficiency in Industry” Project Competition organized annually by General Directorate of Renewable Energy, Ministry of Energy and Natural Resources with its energy efficiency practices initiated within the scope of sustainability efforts.
It has strengthened its global footprint not only with the prizes, but also with its new investments. It has made USD 29.5 million worth of additional polyester investment both in Indonesia and Turkey plants.

In addition to this capacity increase, realizing its vision of sustainability in line with its goals and strategies as well its management commitment, Kordsa issued the second sustainability report based on the "GRI4 (Global Reporting Initiative) guide of the United Nations Global Compact signed in 2014 and was added to the BIST Sustainability Index.