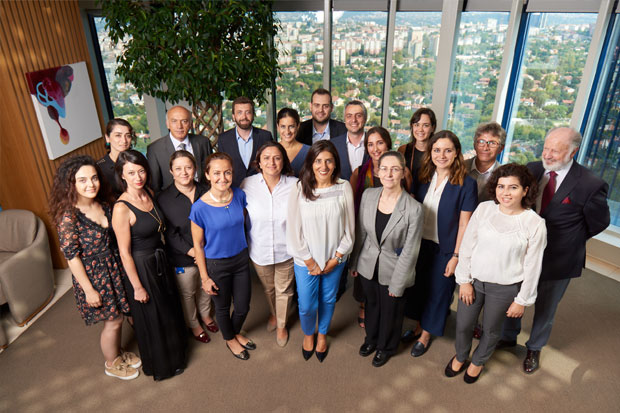 We touch the lives of individuals everywhere in Turkey.

Sabancı Group harnesses the power of its industrial and economic advancements to support social and cultural activities through the Sabancı Foundation. As such, it has become one of the leading family foundations in Turkey.

Sabancı Foundation has built more than 120 institutions all around Turkey in 78 residential areas, such as schools, dormitories, teachers’ centers, medical facilities, sports complexes, cultural centers and social facilities for 46 years since its foundation. Since 2007, 173 projects of non-governmental organizations have been supported. In the field of culture and arts, long-term supports are being provided particularly for example to State Theaters - Sabancı International Adana Theater Festival which has been organized for 22 years. Having provided nearly 50 thousand scholarships in 46 years, Sabancı Foundation encourages success with awards in the fields of education, art and sports.

We support innovative education through Sabancı University. We empower non-governmental organizations by making grants and sharing our expertise. We share our knowledge and experience to strengthen philanthropy. We inspire society by increasing the visibility of “Changemakers.” We encourage students and artists by offering scholarships and grants. We pioneer new approaches and methods implemented in the field of philanthropy, especially by supporting civil society with grants. We contribute to the resolution of social issues by working with non-governmental organizations. We build institutions in the fields of education, culture, healthcare and sports.

Education, social change, culture and the arts comprise the Foundation’s main areas of activity. The Foundation particularly focuses on women, youth and persons with disabilities within these activities.

During the pandemic in 2020, Sabancı Foundation prioritized not interrupting any of its supports as part of a trust-based philanthropy approach so as to help civil society cope with the COVID-19 crisis and to ensure the continuity of the works in the areas of education, culture-art and social change. To this end, Sabancı Foundation has played a pioneering role by signing international pledges prepared by European Foundation Centre (EFC) and US Council on Foundations (COF).

The Sabancı Foundation supports the projects of leading non-governmental organizations with grants to find solutions for today’s complex social issues and make a lasting impact. The Foundation engages in long-term, inter-institutional partnerships to increase its impact.

First launched in 2007, the Sabancı Foundation Grant Programs aim to support non-governmental organizations in promoting social development to achieve equality and active participation of women, youth and persons with disabilities.

In 13 years since 2007, 173 projects were supported reaching directly more than 223 thousand and indirectly over 900 thousand individuals across the country.

Association. Under the scope of the project, trainings for teachers of multi­grade classes in villages were conducted and two guidebooks were prepared. These books were disseminated to 9 thousand teachers in rural areas through the online system of the Ministry.

The closing ceremony of the project was organized on October 22, 2020 with the participation of the Minister of Education Ziya Selçuk. Another big project that was launched in cooperation with the Ministry of Education and British Council in 2020 was the “English Together” project aiming to improve the vocational development Philanthropy Seminars” was held on December 15, 2020, under the theme “Technology for Social Change – Is Everybody Online?” of English language teachers. The project aims to reach 37 thousand teachers and 16 million students at the secondary school level in three years.

In 2020, Turkey’s Changemakers Program, highlighting the stories and efforts of individuals who make significant contributions to social development and inspire society in Turkey has completed its 11th season. Out of more than 8 thousand applications, 195 Changemakers were selected and videotaped since Turkey’s Changemakers Program’s launch year of 2009. The videos were shared on the program’s website, Facebook, Twitter, Instagram and YouTube reaching more than 37 million views on domestic and international platforms.

By bringing together non-governmental organizations, foundations, the private sector and public agency representatives with national and international experts, the Sabancı Foundation enables experience sharing regarding new approaches in philanthropy and civil society. In this context, the 13th of the “Sabancı Foundation’s Philanthropy Seminars” was organized on December 15, 2020, under the theme “Technology for Social Change ­Is Everybody Online?” with the moderation of Serdar Kuzuloğlu and the main speaker of the seminar was the founder of iamtheCODE Mariéme Jamme.

To discuss the destructive effects of the COVID-19 pandemic on women’s rights and gender equality, Sabancı Foundation organized a meeting with the attendance of 36 participants from 29 organizations on June 30, 2020, called “The Impact of COVID-19 Pandemic on Gender Equality: Problems and Solutions Meeting.” Following the meeting, action points for the needs and solutions have been decided and new collaborations have been formed.

In 2020, a series of children’s books about nature and animals was prepared by the Foundation as a new project within the field of social change. The first set of books telling stories of the rabbit called Papuduk has been distributed free to NGOs working with children and to public schools located in disadvantaged areas.

In 2020, the Sabancı Foundation also continued to develop partnerships, follow up and contribute to the developments in the international arena in its focus areas. The Foundation continued to participate and contribute to the work in disability rights and gender at the European Foundation Center, which has been a member of since 1991 and was selected as a member of the Board of Directors in 2020 again for three years after serving as the only foundation from Turkey between 2011-2016. The Foundation has also continued its mission of thought leadership with articles published in reputable international publications in the field of philanthropy. Institutions Over the past 46 years, the Foundation has built more than 120 institutions at 78 residential areas across Turkey including schools, student dormitories, healthcare facilities, cultural centers, sports facilities, libraries, teachers’ centers, social facilities and Sabancı University, which is one of the most significant investments of the Sabancı Foundation. In 2020, 30 out of these institutions received repair and maintenance and other kinds of supports from the Foundation.

In 2020, the School Climate Improvement Project, which had started as a pilot project in the Anatolian High Schools which are among the institutions built by the Foundation, continued successfully. Students in the pilot project schools established clubs and took an active role in the project. Steps for extending the project to new schools were taken with the cooperation of the Istanbul Province Directorate for Education. The Project was started to be implemented in Borsa Başakşehir Vocational and Technical Anatolian High School. Also, Anatolian High Schools which are among the institutions of the Foundation took important steps including being again among schools which accept students with the entrance exam and getting candidate status for becoming an IB school.

Since its establishment, Sabancı Foundation has provided nearly 50 thousand scholarships through the scholarship program in 46 years. In 2020, nearly 1,500 students benefited from the scholarships, with 330 being first-time beneficiaries.

The youngest culture&art event of the Sabancı Foundation which started in 2016 is the Short Film Competition with the motto “Short Film, Long Impact” to raise awareness on social issues through art, to highlight the creative perspective of cinema and to empower and encourage young talents. The award ceremony for the fourth Short Film Competition with the theme “Digital Loneliness” was held

in January 2020. The applications for the Sabancı Foundation 5th Short Film Competition also started in 2020 with the theme “Changing Climate, Changing Lives.”

Since its establishment, the Foundation has provided nearly 50 thousand scholarships through the scholarship program in 46 years. In 2020, nearly 1,500 students benefited from Sabancı Foundation scholarships, with 330 being first-time beneficiaries. A well-attended scholarship meeting was held with the participation of graduated and current scholars of the Foundation for the second time on February 27, 2020. Gains from the mentorship relations were shared during a panel moderated by Dr. Rıza Kadıoğlu.

Additionally, the Sabancı Foundation Awards Program recognized individuals with awards for their exceptional performance in education, sports, arts and culture both in Turkey and abroad. Nearly 1,200 awards have been provided to date.

The 5th Short Film Competition of the Sabancı Foundation was organized with the theme “Changing Climate, Changing Lives” in 2020.