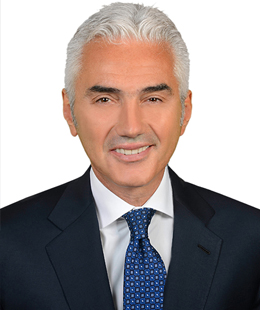 After starting his career at General Motors Technical Center in 1985, Dinçer joined Sabancı Group in August 1995, serving initially as Executive Board Member, and then in December 1995, as Executive Vice Chairman of Temsa. In October 2001, he assumed responsibilities within the Holding company, first as Food Group Vice President, and six months later, as Holding Executive Board Member and Food Group President. He took over as Food and Retail Group President in September 2004, and after organizational restructuring in March 2011, as Retail and Insurance Group President. In June 2016, Dinçer was named Insurance Group President and later in April 2020, Financial Services Group President. With this role, he currently serves as Chairman of the Board of Aksigorta, Agesa, Exsa, Tursa and Ankara Enternasyonel Otelcilik, as well as Board Member of Brisa. Haluk Dinçer served as President of TÜSIAD – Turkish Industry and Business Association in 2014-15, and as President of Turkish-American Business Council (TAIK) in 2008-14. He has been a Board Member of the Global Relations Forum (GRF) since February 2018 and a member of the Geneva Association since June 2019. Dinçer has a BSE degree in Mechanical Engineering and an MBA, both from the University of Michigan.